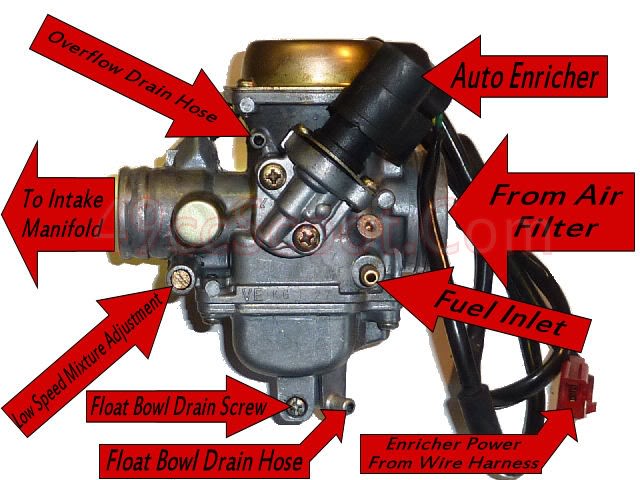 At least once a day someone asks “How can I tell if my carburetor is tuned right” or something similar.  To be honest, the question is usually more like “What the hell is wrong with this piece of crap scooter”? but we are going to start this tutorial under the assumption that your scooter is currently running, but could possibly be running better.

There are a lot of factors involved in getting your carburetor dialed in just right.  If your scooter is running pretty well, but it still stumbles or hesitates, you might be wondering how to figure out what steps to take next.  One of the easiest ways to get an idea of what you are working with is to do a “plug chop”.

How to do a plug chop:

First, buy a new spark plug.  An old plug that already has carbon all over it won’t give a very good reading.  You will want an NGK CR7HSA, which sells for about $3.00 or less at any place that sells auto parts.  Now that you have your new plug, don’t install it yet!  Get the tools you will need to install the plug and hop on your scoot.  Take a spin around the block a few times to get the engine up to full operating temperature.  While you are riding around, look for a spot with a long level straightaway if you can find one.

Once the engine is up to temp, pull over and let the engine cool down for a couple minutes before removing the old plug and installing the new one.  Pulling a blazing hot spark plug out of the engine is a good way to burn yourself and wreck the threads on the head since the aluminum head and the steel threads of the spark plug cool at different rates.  Once your old plug is out and your fingers are no longer burning, Install your new plug (finger tight plus 1/4 turn is a good rule of thumb), then go for a run at wide open throttle for at least a half mile or so.  If you can hold WOT longer, that’s even better (probably not a big problem for you 50cc guys)…

While still at WOT, hit the kill switch and glide to a stop. Do not allow the engine to idle at all before turning it off.  The idea is that you want the plug to show the conditions of the engine at its hottest temperature and greatest amount of fuel/air mixture. With the engine stopped, wait a couple minutes for things to cool down again, then remove the new spark plug.  Swap the old plug back in and ride home. Once you are in an area with good lighting and can take a close look at the new plug you just tested, compare it to the pics below to see where you are at.

If your mixture is lean, you need to add more fuel to move toward the “optimal” plug appearance.  This is done by turning the air/fuel mixture screw on the carburetor counterclockwise.

If your mixture is rich, you need to reduce the amount of fuel to get it toward the “optimal” plug appearance.  This is done by turning the air/fuel mixture screw on the carburetor clockwise.

Start the scooter and go for a ride again to get it up to operating temperature.  Pull over and let it idle for 30 seconds or so, then turn the air/fuel mixture screw 1/4 turn in the direction you need to go to add or subtract fuel from the mix.  If all is well, give the scoot 15 seconds or so to adjust to the new setting.  If things are good, give the screw another 1/4 turn in the same direction.  Hopefully the idle will have gone up a little bit after making these adjustments.  If the idle went way up, turn the idle speed screw clockwise until things calm back down to where they should be.

Now hop on and go for another ride to see if you made things better.  After a few minutes of riding around, toss your nearly new plug back in and ride around for about 10 minutes before repeating the plug chop.  Installing a new sparkplug before each chop is the ideal way to go, but if you had that kinda money kicking around, you would probably be riding a Ruckus and paying someone else to do this for you 😉

This is just one simple way to troubleshoot what is going on with your engine.  We will add more content about tuning as time allows.  Don’t forget to check out the Chuckus Life Facebook page to get help from more than 3,500 active members, several of whom actually seem to know what they are talking about!!